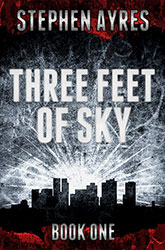 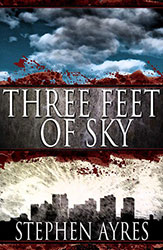 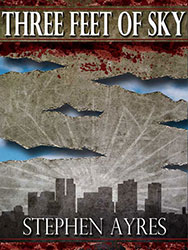 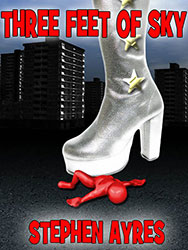 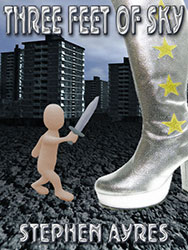 Three Feet of Sky has had a number of different covers over the years. All but one were designed by yours truly, starting with the latest at the top left, then moving clockwise to the first on the bottom left. Only the four on the top row have appeared on the published version – I have a real soft spot for the one with the little red man under the boot, but many people told me it was silly so I changed it.

The first cover, where I used the name Calvin Ayres – Calvin is my middle name – was for the book’s appearance on the Authonomy website in early 2010. The book was very well received and reached a rank of 32 before I took it off – I became too obsessed with the site and had consequently stopped writing, so I had to leave. This was my favourite cover, except for the font, but I did not have the means to reproduce it to a professional quality.

Someone else produced the second cover – the blue with silver text. Though it had that ‘real’ book cover look, I thought it a bit bland. Also, when reduced to Amazon thumbnail size, you could only make out the word ‘sky’.

I always wanted a more pictorial cover for the book, perhaps with the glam gang and/or Adam seen in hazy focus, but I went with what I could solidly achieve.